For the ZOē team, the goal of connecting to all five senses is always part of the core architecture of crafting a live experience. But when developing the concept for a marketing tour to bring the good vibes of Otter Pops to the masses, ZOē capitalized on connecting to a ‘sixth sense’ of sorts: the sense of nostalgia.

Otter Pops hit the market in 1970. Created in Hollywood, CA, the playful pops reflected the Southern California state-of-mind: sunshine on your face, sand between your toes, and embracing the joy of a carefree summer day. The brand became not only a household name, but also cemented itself into modern pop-culture. Hundreds of thousands of kids grew up ‘chilling out’ out with their favorite Otter Pop (The ZOē crew is split down the middle: half are loyal to Louie-Bloo Raspberry while the other half is all about Poncho Punch.)

Nearly five decades later - merely the sight of an Otter Pop character still brings deep waves of nostalgia (and sometimes giddiness) to all those ‘kids’…now adults. Otter Pops enthusiasts are now finding joy in sharing the playful treat with their children… and new generations of Sir Isaac Lime lovers are born!

Otter Pops approached ZOē Productions to create a mobile experiential tour that would tap into that ‘sixth sense’ of nostalgia and reignite consumers’ passions for the Pops.But how do you market a feeling…? ZOē began by crafting an attention-grabbing, sensory-oriented, brand-infused, and fully immersive environment on wheels. 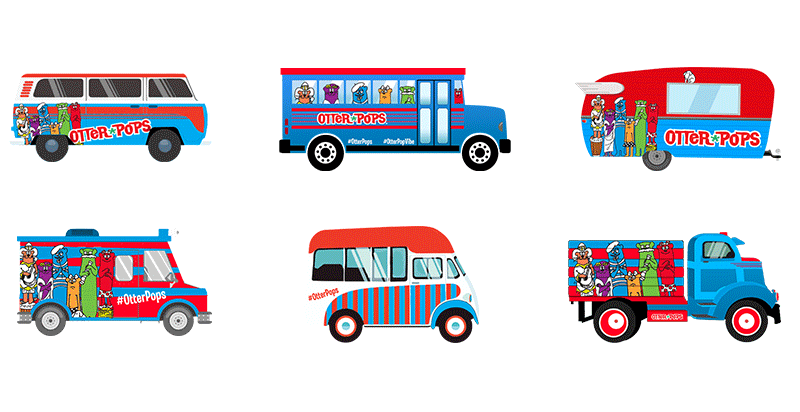 But it was the success of the “Otter Pops Stop,” a pop-up vintage style beach bar activation at the World Series of Beach Volleyball 2017, which lent the inspiration for the final vehicle.The beach bar was the perfect setting for guests to immerse themselves in the carefree culture of the brand; it just needed wheels.And so - the Otter Pops Beach Bungalow, a stunning tiny house-turned-pop-bar, became the mobile means to spread the vibes for the coming tour. 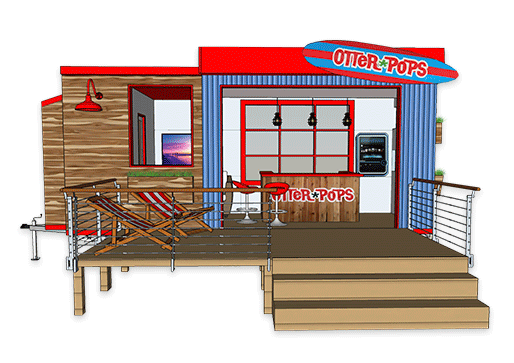 ZOē designed the Bungalow from the ground up to embody the good juju of the brand message. The vibrant brand color palette splashes every surface, vintage decor and live succulents add finishing touches, and imagery of the iconic characters greet consumers around each corner.

When the Bungalow rolls up, consumers are immediately ‘transported’ to the beach (even if they find themselves in the middle of a parking lot). The experience involves far more than just sampling pops; aboard the Bungalow, guests are treated to:

Bungalow Pop-Tenders, brand ambassadors and staff went through intensive training to become effective envoys of the brand messaging. Before long, they were no longer running from a script but exuding genuine love for the brand which mingled with the energy from the consumers to create an organically joyful environment.

It was incredible to see eyes light up when people approached the Bungalow, and reminisce with folks about their childhood memories of Otter Pops. Best of all was watching kids smile as they tried a Pop for the first time.

Traversing nearly 2000 miles, the Bungalow made 25 stops on the 2017 tour, including The Wango Tango Music Festival, The L.A. Zoo, The Huntington Beach Fourth of July Festival, The Miramar Air Show, jaunts to a bevy of retail hubs such as Ralphs, Albertson’s and Walmart, and a return trip to the World Series of Beach Volleyball in Long Beach.

Throughout the course of the summer, an estimated 80,000 people experienced the Otter Pop Vibes Tour and over 100,000 pops were shared by families, friends, and fun-seekers.

Retail locations which hosted a tour stop showed an average increase of 1900% of Otter Pop sales at their store in the weeks following the stop. At festivals, vacation destinations and large-scale events, the Bungalow generated an un-matched buzz with non-stop crowds from sunup to sundown.

The tour injected new life into the brand’s social media footprint with ripples spreading fervently through every channel.

Harnessing the power of nostalgia proved a successful strategy for the Otter Pop Vibes Tour. Not only did that sense of nostalgia shape the experience and rejuvenate a passion for the product by calling back to the past, it truly sets the stage for the brand’s future.

Plans for the 2018 tour are already under way; get more info at: www.otterpopstour.com.


See coverage of the tour in Event Marketer.

ZOē Productions went above and beyond embodying the Otter Pops brand and bringing that to life with our first-ever branded road tour. There was not one leaf left unturned in creating a one-of-a-kind Beach Bungalow that showcased the extreme detail ZOē Productions puts into their craft.